BACK TO BASICS FOR BOKS 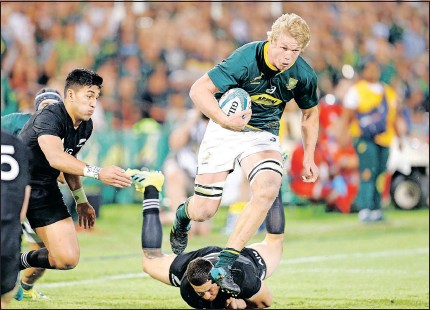 PIETER-STEPH du Toit, the quietest man in the Springbok team, probably said the loudest of all the words spoken before tomorrow’s mighty clash between the Springboks and the All Blacks when he called on his team to show the mettle that won them the World Cup three years ago. Du Toit won World Rugby’s Player of the Year award in 2019 and while he, personally, is fighting hard to regain that form after a run of crippling injuries, there can be no excuse for the rest of the Boks and they really need to kick on this year and prove they can defend their title next year in France. The All Blacks are vulnerable, especially up front, and the Boks need to put them away if they are to be taken seriously. “We as a team are at a point where we must show the public that we are as good now as we were in 2019,” Du Toit said. “And there is no better opportunity to prove it than by playing the All Blacks in South Africa after a four-year absence ... and beating them.” Sadly, Du Toit has played just five Tests since that last World Cup because of injury and he has had plenty of time to observe and reflect. “Time does move on and we need to show that we have evolved our game from 2019 and that it remains just as much a winning way of playing,” the 29-year-old said. While du Toit is not going to discuss game plans in the media, he did say that his team has to learn from how they have lost narrowly to the All Blacks in recent games. Last year, in the 100th game between the countries, the Boks conceded a penalty for Jordie Barrett to kick his team home, and in 2018, the last time the teams played in South Africa (Loftus Versfeld), Richie Mounga landed a last-minute penalty for his team to win 32-30. “In the close games we have lost to New Zealand over the last few years we have had a tendency to fall away at the breakdowns in the last quarter,” Du Toit said. “They have won vital turnovers to give them opportunities to win the games. “This game on Saturday will again be close and we have to keep focused on the breakdown until the final whistle.” Du Toit adds that the All Blacks, by definition of who they are, will come out all guns blazing to prove a point. “If you look at their first Test against Ireland ... they played extremely well, they were as good as they have ever been in the past, and in the next two games they made some mistakes that Ireland exploited but that does not make them a bad team all of a sudden. “Instead of just criticising the All Blacks, more credit should have been given to how well Ireland played.” Du Toit knows he has to deliver himself and the good news is that he feels he is building nicely toward his best. “Injuries are an unfortunate part of the game and I have had my share over the last two years. Coming back is very much about getting as many minutes as you can on the training field and then on the field,” he said. “It makes a massive difference if you can tick those minutes off on and off the pitch, and I have been doing that, and playing all the way through in the third Test against Wales has done me the world of good.” s -EANWHILE THE !LL "LACKS are not just battling on the scoreboard at the moment, having lost a home series 2-1 to Ireland last month. They have struggled to contain a rampant Irish pack in the scrums and driving mauls, where the outstanding front row of Andrew Porter, Dan Sheehan and Tadhg Furlong set the tone. And they were backed up by grizzled veterans Cian Healy, Rob Herring and Finlay Bealham off the bench. The All Blacks just don’t have the big names that used to stand up to the Boks in the recent past, such as Owen Franks, Joe Moody and Charlie Faumuina.