‘NEVER SAY DIE’ GRIQUAS BEEFED UP AND READY TO ROCK 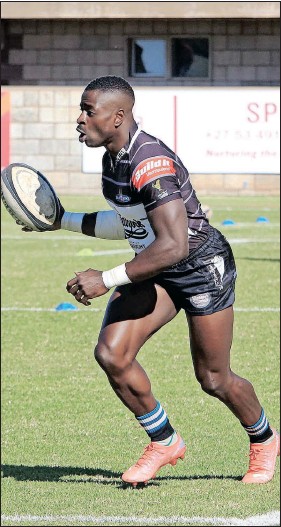 The Windhoek Draught Griquas have released the names of their squad that will do duty in the upcoming domestic Carling Currie Cup series with the bulk of the team made up of players that propelled them to an appearance in last year’s final after a half a century. Griquas ended last season on a high note, albeit without the Currie Cup trophy to cap a whole season’s commendable effort throughout the championship. The Kwaste were pipped to the topmost domestic rugby prize by a spirited Mpumlanga Airlink Pumas who ultimately laid claim to the title after they subdued Griquas in the final at Windhoek Draught Park in Kimberley. The squad announced this week contained a few surprises indicating that the team management brought new blood to the provincial side without much fanfare during the break. For starters the coaching duo of Pieter van der Berg and Barend Pieterse have been retained for the next round of domestic games. Berg still has two more seasons to run on his contract. Griquas have shopped for players from peer domestic unions as well as the Varsity rugby outfits and the Springboks Sevens in an effort to widen their options at almost all positions. Among the acquisitions Griquas made on the quiet is that of former Blue Bulls prop Cebo Dlamini who will now turn out in the peacock blue colours next season. Dlamini will up the competitive stakes for game time along the likes of Andrew Beerwinkel, Janu Botha, Eddie Davids, Kudzwai Dube, Justin Forwood and Andries Schutte. The team management have also retained the services of hookers Gustav Du Rand, Janco Uys and Simon Westraadt. There will be more jostling for play time among the Kwaste at lock with former Varsity Cup prodigy Albert Liebenberg joining the side from Maties. He comes with a reputation as a fierce enforcer and ruck clean out specialist. Liebenberg joins fellow Griquas debutants, former Varsity Cup and Zimbabwe junior international squad player Godfrey Muzanargwo (23) including Mihlali Stamper, Thabo Ndimande, Bobby Alexander, Malcolm Jaer and Lubabalo Dobela. About the acquisition of Dobela devoted Griquas fan Marius van Rensburg quipped on the team’s facebook page “Well done with Lubabalo Dobela. One of the best fly halves around. He is a true asset, fantastic player, great young man”. In other related Griquas developments is that the side will on August 22 host their golf day at the Kimberley Golf Club.