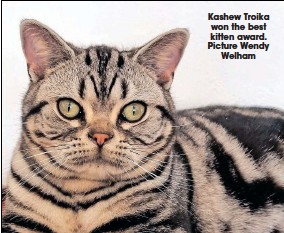 AN AMERICAN shorthair kitten that was bred by Kimberley resident Wendy Welham won the best kitten category at the South African Cat Council’s Cat of the Year 2022 competition that was held in Randburg on the weekend. The nine-month-old kitten, Kashew Troika, won a floating trophy, a statue of the patron saint of cats, a rosette, cat food and a range of other paraphernalia. Welham also entered another American shorthair named Kashew Turgut, which came seventh in the neutered cat category. A Cornish rex, Kisamee Delfine, that Welham had bred and sold to another owner achieved 13th place in the neutered cat section. Welham said that although Kashew Troika had previously won competitions in Johannesburg, Cape Town and East London, it was difficult to gauge what the level of competition would be like at a national cat show. “It’s a big honour as there was stiff competition from entrants from all over the country. We had three cats representing the Northern Cape and they all received places.” Welham added that her cats had competed against different breeds. “Breeders and owners are invited to participate and cats are adjudicated according to standard points of each individual breed.” She said that she currently owns 19 cats.