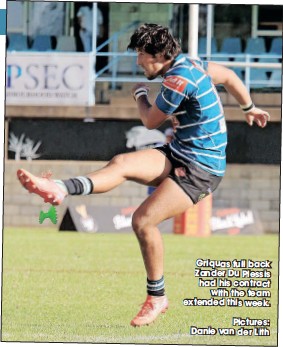 WINDHOEK Draught Griquas Rugby have this week confirmed the contract extensions of several players at the Kimberley-based union. First to be revealed on Monday was the flanker Hanru Sirgel (24) who completed his first season at the Kwaste. Sirgel had previously been signed on from the Pumas in the 2020/21 season where he played in the Super Rugby Unlocked series. The University of Pretoria graduate undoubtedly earned the extension to his contract following yet another superhuman effort in the Griquas last game away against the Vodacom Bulls. His effort in the Griquas attack in which he contributed a brace of tries, saw the provincial side restrict the normally rampaging Bulls to a scoreline of 48-38. The next reveal on Tuesday was that of prop Kudzwai Dube whose endorsement by the Griquas management means the former SA Under-20 player might enjoy more game time next season. Dube had, in the latter half of this season, been swapping places with Eddie Davis. The union pulled out another extension by midweek when they confirmed Zander du Plessis as a team member for the coming season. Of course, Du Plessis’ endorsement was a no-brainer after his excellent performance in many of the matches where he effectively plugged the gap at kicking duties when the reliable George Whitehead was laid low by injury. Even after the return to fitness of Whitehead, Griquas head coach Pieter Bergh saw fit to retain the services of Du Plessis albeit at centre. The Union has not moved to quash raging rumours to the effect that lock Mzwanele Zito might head to neighbours Free State Toyota Cheetahs. The front ranker did not make the playing XV last week with the union merely announcing that he is injured. Griquas will next host the Toyota Free State XV on May 28.