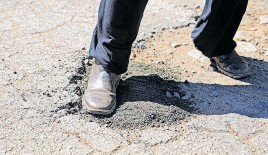 AN ELDERLY woman from Belgravia started filling the potholes in her area in order to be able to enter her own yard. The woman, who prefers to remain anonymous, said it was a “nightmare” to try and enter her yard without damaging her car tyres. She said that she and a friend started diving around with buckets in search of gravel to fill the potholes. “We found gravel, which we collected in 14 buckets, and we filled a lot of potholes with it. Unfortunately, we do not have tar, but this will work for now,” said the woman. “It took us several trips and we had to wait for whenever we felt fit to do so.” She said she did not do this as a “publicity stunt”, but to make her life easier after she saw her neighbour's car tyre damaged by the potholes. “I did this for myself … and not to brag about it or blame anyone else. “But it is frustrating that we, as ratepayers, are paying for services that we are not getting,” she pointed out. The woman said that in addition to the already bad potholes in her street, municipal workers had cut a large, deep square on the road and left it open. “That was in 2021, when they were supposed to be fixing the roads. No one is saying anything, and I am too old to fill that big patch.” She explained further that the roads are damaged by trucks that continue to get lost in the city and end up in smaller streets like hers. “Some of the roads are not good for trucks to travel on, but are for lighter vehicles. We cannot blame the trucks either, because there are not enough road signs. “Apart from damaging the roads, the large trucks also knock over the already limited road signs and robots. “Our municipality is really failing us,” said the woman.