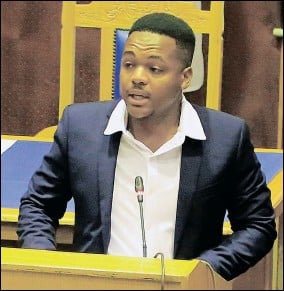 AS THE city survives another weekend without water while major leaks are attended to, Sol Plaatje executive mayor Kagisho Sonyoni conveyed his surprise over the rapid deterioration of the city’s ageing infrastructure. During a debate on the 2022/23 medium-term revenue and expenditure budget, it was noted that 63 percent of water losses were due to leaks. Sonyoni arrived after the special council meeting had started on Wednesday as he had to first attend to protesters from Riemvasmaak, who had gathered outside the municipality to voice their displeasure over poor service delivery and a non-existent electricity project. The Speaker, Nomazizi Maputle, had to remind councillors while the meeting was in session that although Sonyoni was young, they had to respect him as the mayor. Sonyoni indicated that they were “never prepared” for the rate at which the Riverton purification plant was “retiring”. “An application has been submitted to National Treasury for a water loss reduction strategy focusing on the pipeline from Riverton to waterworks. According to the records, the purification plant at Riverton dates as far back as 1890. It can be assumed that the distribution line is as old as from that time. It has outlived and outshined itself, as it is retiring faster and we were never prepared for this. We trust that the officials will do their best to secure the required funding to replace it.” He promised that he would not allow any “hard-earned funds to be spent in vain”. “We are starting our term from a disadvantageous position, a state of no money, a state of low collection rate, a state of rising indigents, a state of dilapidated roads, a state of sewage leaks, a state of torrential rains that devastates humankind, a state of water leakages that led to the closure of the R31 leading to Barkly West, a state of no adequate refuse compactors to service the city, a state at which the municipality placed itself on a financial recovery path.” Sonyoni committed to “turn things around“for the people of Sol Plaatje Municipality. “The municipality will become a flagship of this Province and will obtain national ranking before our term ends.” He noted that it was necessary to re-establish the project management unit of the municipality. “There must at least be a caretaker in this position. The reduction and withdrawal of grants affected the adjustment budget. We cannot have a situation where we lose money that was allocated to the municipality to further the wishes of the people, without having to borrow and lose such money just like that.” Sonyoni added that council had approved an investigation into alternative energy sources. “Proposals will be invited soon. This will enable the municipality to be able to make submissions to the Department of Mineral Resources and Energy to attract grant funding in order to reduce electricity consumption.” He promised to implement consequence management where officials would be subjected to performance evaluations. “Consequence management will prevail, just give me time - the next two weeks.” He acknowledged the high unemployment rate and looming rise in inflation. “The reality of poverty, joblessness and crime is vivid. We see people waking up and standing on corners, they have given up seeking employment as many have been up and down seeking opportunities without any success. Social grant dependency is the reality for many households. The devastating effects of the pandemic are clear too. “I have been looking around to observe if there is anything new coming up. I could not find anything except for the KFC in Carters Road and recently behind Kwikspar, a residential development. Judging by the size, we are talking about less than 100 townhouses.” The executive director of infrastructure and services, Boy Dhluwayo, stated that they aimed to save 10 percent of water losses by recycling water that was draining into the sewerage system. “Through the use of a smart ball, it can detect underground leaks along the pipeline.” He added that they had submitted a proposal to Treasury for the construction of a new R3.2 billion pipeline between Riverton and Kimberley. “If the existing pipeline fails, it will be a catastrophic disaster. The project will ensure that all areas have water storage for up to three weeks, where residents will not be affected if there are water interruptions.”